We sat on the veranda watching the riverbank intently. The storm had passed but we knew that the river was running dangerously high. Suddenly we saw it! A brimming-over converged into a thin silver stream running down the bank and formed an ever-growing pool of water in our field. In spite of the railway sleepers that our father had used to shore up the bend, the river pushed its left bank aside with contemptuous ease and the powerful current flooded through the 10ft gap. We jumped for joy as the water crept nearer and nearer to the pavilion. The field had become our lake to explore in the punt with a dog seated at either end enjoying the fun too. 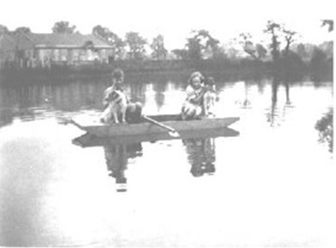 My brother and I on the temporary lake 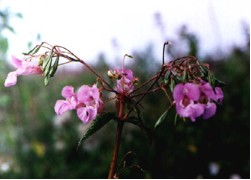 On quieter days, we paddled on the sandy riverbed with the water rippling a few inches over our feet. In July and August, the banks enclosed us with their towering growth of the Indian plant, Impatiens glandulifera, imported nearly 150 years ago from the Himalayas. To us, it was firemen’s hats. As we pushed among its thick red stems and handsome flowers from palest pink to deep claret, we came under fire from its snapping seed capsules, fascinating to pinch.

Himalayan Balsam flowering in August by the river bank.

In the corner of the field, we had a knotted rope hanging from an oak tree on which we could swing across the river. A brood of Black Leghorn chicks raised by my pet hen soon discovered another way. They took off and landed safely on the other side leaving their more portly parent clucking anxiously until their return. We first came to the ground in 1930 because the Japanese of the Yokohama Specie Bank had just employed our father as steward and groundsman. There was a white shed at the bottom of the field, perfect for the pony, donkey, chickens and turkeys although the first heavy rain demonstrated that ducks would have been more suitable. Our father was woken up by the sorrowful braying of the donkey just managing to keep his head out of the water. The River Pool had reclaimed its flood plain!

The ground was originally part of the eight-acre field of Copers Cope farm as shown on the map on the front cover. It was at the limit of the farm’s land close to the Lewisham border. When purchased by the Southwark timber merchant, John Cator, in the late 1700’s, the intention had been to develop a high-class suburb with large houses and tree-lined roads. The Cator family leased the land out for building when the railways built in the 1850’s with stations at New Beckenham and Lower Sydenham opened up the area. In 1961, the lighting at Lower Sydenham station was only then being changed from gas to electric. As a child I had always envied the porter who walked from light to light pulling down the chain to light the lamp with a ring on the end of a stick.

I crossed over the bridge four times a day to go to school at Haseltine Rd in Bell Green. If I had a penny, I might put it in the BeechNut chewing gum machine where every fourth time two packs were delivered. I did not really like chewing gum but it was the excitement of seeing two packs come out instead of one!

Although Worsley Bridge road provided access to the eight-acre field, housing was restricted to the higher ground in Copers Cope Rd. Building began opposite the end of Brackley Rd near the new church of St Paul. On either side of the river, the London banks used the land for their sports grounds and our field was leased to the Yokohama Bank with the National Provincial bank taking the 13-acre field over the other side. When it rained, the river overflowed mostly our way. There is evidence that the river existed in Roman times. Parts of the Roman road between London and Lewes lie on a line of flat land on the well-drained Blackheath pebble beds between the thickly forested London clay on the high ground to the East and the often marshy Pool valley to the West. Between the end of Greycot road and Meadowview Close, in the 7-acre field of Copers Cope farm, the Roman road is only just over a foot below the present surface. It consists of 30ft wide gravel, 11ins thick, with rut marks, resting on pebbles and flints. In this way the Romans on their way North avoided climbing up to Stumps hill but kept away from the river until a crossing over a firm river gravel near Catford.

THE BEGINNING OF THE END...In 1940, two silver and blue bombs angled through the air from a German bomber aiming for the railway line where it crossed the river. One bomb fell in our field. My brother, waiting to join the RAF, was working at the factory, John Bells, painting the air raid shelter doorframes yellow. His foreman made the dry remark “That should improve the drainage”. The second bomb hit its target and stones from the railway went through a line of white towels that my mother had just pegged on the line. She did not let us forget it because we had no electricity or gas and she had spent the best part of the day boiling the laundry up in a copper outside.

After the Japanese attack on Pearl Harbour, 7.12.1941, we moved to one of the end houses in Copers Cope Rd but my dog, Rover (1936-1954), found a way back that became his daily routine. A fallen willow tree formed a bridge over the river. Every afternoon, Rover took his diagonal route across the National Provincial Sports Ground to visit his birthplace. His path passed between the wickets of the first team cricket pitch and play stopped at three o’clock on Saturday afternoons to let him take his constitutional.

0 # clark 2015-12-03 07:44
Great
Reply | Reply with quote | Quote
0 # Mal Mitchell 2017-11-08 16:43
The Beck, or should it be called the Hawksbrook rises in Spring Park and gathers a few small tributaries, runs through Highbroom Wood and Langley Park then to Kelsey Park and under the High Street. When it gets to Cator Park it is joined by the Chaffinch brook which comes via South Norwood Country Park. Its also joined by the Penge Boundary stream in Cator Park and becomes the Pool River here, passing under Worsley Bridge Road on its way to Catford where it joins the Ravensbourne and as the Ravensbourne makes its way to Deptford Creek and the Thames.
Reply | Reply with quote | Quote
0 # Mal Mitchell 2018-05-29 12:34
just a comment for good orders sake. Its been discovered that John Cator didn't intend to develop the estate requesting in his Will that it shouldn't be broken up, but his nephew and heir, John Barwell Cator and other estate trustees acquired an Act of Parliament permitting leases and exchanges of property from 1825 and the Cators moved their main estate to Woodbastwick in Norfolk.
Pat was instrumental in us becoming aware of this and her childhood memories probably sparked her interest in local history..... and passed the interest on to us and others. Thanks Pat.
Reply | Reply with quote | Quote
Refresh comments list
RSS feed for comments to this post