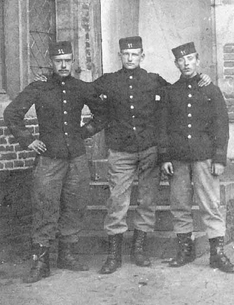 Leon Degroote (standing on right) was born in Brugge (Bruges), Belgium in 1889. In 1909 he joined the army and served with the 11th Line Regiment. For the next five years he would spend most of his time garrisoned in his home city.

Belgium was considered to be a neutral country. However in 1914 war was looming. Germany, using self-defence as an excuse, demanded that Belgium allow the passage of its armies through its territory. Belgium flatly refused and Germany invaded on 4th August 1914. This act of aggression brought Britain into the war.

The Belgian army was small and ill-prepared. They were quickly overrun and retreated to a line along the River Ijzer just a few miles east of the French border. To hamper the Germans the Belgians flooded the low-lying lands around Diksmuide with seawater. Now entrenched, under fire and living in a swamp, the Belgians suffered thousands of casualties with as many succumbing to sickness as to enemy fire. 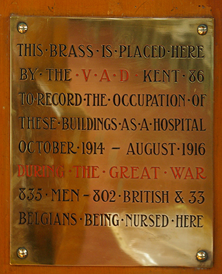 So Leon contracted Erysipelas, a life threatening and infectious condition. He was evacuated from the line along with one of his officers who he may have been a batman to. The pair reached one of the channel ports where the officer was taken aboard a Red Cross mercy ship. It seemed as though Leon would be left for the next crossing.

The officer intervened and demanded that Leon accompany him. So the pair were taken to England and to the Christchurch emergency hospital in Beckenham. The hospital was one of many set up across Britain by the Voluntary Aid Detachment.In all 802 British and 33 Belgian soldiers were treated at Christchurch.- a plaque in the hall records this. 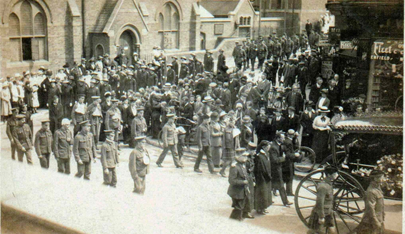 In July of 1915 a compatriot of Leon's, Albert Debucquoy of the 3e Jagers En Voet (Foot Rifles), died at Christchurch. He was given a military funeral and photographs of the event survive. In one scene (left) Leon is seen amongst the chief mourners walking behind the hearse accompanied by an officer, possibly the one he had travelled with. Albert was buried at Elmer's End.

As Leon recovered he took up orderly duties and was photographed (below standing on the right ) at the hospital in this role. He spent most of 1915 at Beckenham but by the end of the year he was considered fit for full time work. He was released from the army on unpaid leave to work "in a factory supplying the allied armies". He was allocated a job at the British Leather And Cloth Manufacturing Company at Hyde near Manchester. So he left Beckenham, no doubt thankful for the care he had received. 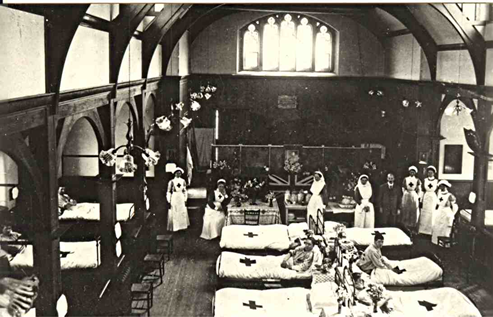 Leon eventually made Hyde his permanent home and became a British Citizen. He married Gertie and the couple had three daughters. Despite at one time being given six months to live he survived until 1947.